... that is a hell-vision of what War

AN ADMONISHMENT TO A MILITANT HUMANISM

Now, Sunday, the twelfth of December, about 4:30 in the afternoon I am thinking about the fact that 200,000 Russian soldiers are lined up along the borders of the Ukraine. Can you imagine where on the globe to your crane is? Well imagine where the Nordic Peninsula reaches down with Denmark to touch upon the northern parts of Germany. Now move your gaze East across Poland into Belarus and turn south towards the black see that is the Ukraine. Ukraine of the black earth that is so rich that it is envied breadbasket all of Western and Eastern Asia and of course the looming superpower of Russia that extends like a bear looking down at an angry dog as it walks by.

In the wake of World War I, in 1919 the Ukraine had fallen apart after a century of trying to pull itself together from disparate parts claimed and then unowned and reclaimed by other European powers for so many generations. But in 1919 several large groups with allegiances to Russia or Ukrainian independence or one of several more “power groups” found itself in the middle of the constant exchanging of this season’s bully gang, as chunks of territory were stolen by one group and then carried off by another. Soviet communist propaganda flooded through the country based on rumors and lies and the intentional inflammation of animosities between groups of people living in the area of Ukraine, and few dare to venture out at night because in the country of bandit fiefdoms the streets at night belonged to bandits.

And the major powers of the world all gathered around this magic circle suffering like a boiling pot of demons and circled by witches. Each of the which is envious of the others and plotting against each other so that no time could democracy or peace ever settle on any patch of land.

I described this miserable situation because it is a situation I see the United States sliding into itself, just as so manes-called lesser countries in the world which are also sliding, sliding against their will and everyone’s efforts, all sliding into the same whirlpool of enmity, lies and exploitation in which every gang steals your crop, your livestock, and then rewrites the laws to rob you of what you have left.

As nations got to this chaos, they set forth on a road that began with polarization, the valorization of bullies, and the intemperate language of those who no longer respect the institutions already existing in their community, the courts, the government, and religions and philosophies as well.

It begins with newspapers that have devolved into gossip and intemperate talk. It continues with the occasional assassination here and there, going unanswered and leaving a precedent set with the door cracked open for somebody to open up a little wider to squeeze a little bit bigger devil out into the world of the commons of the community so plagued by prodigies of outrage and a dwindling hope for the future. A field tilled and fertilized to plant the seed of tyrants and authoritarian regimes.

At 71 years of age I still believe in the insights that went into creating the American Constitution, the notion of balancing powers between the judiciary, the legislation of an executive, the faith and principles of democracy and liberty of speech, and the recognition that a common respect for all of this, if nurtured step-by-step, could re-knit the fabric of society and our notion of the common good. As the Ukraine cowers again beneath the shadow of the Communist cossack Shashka sabre I predict that you too will see some of the horrible truths of history brought to the forefront of the conversation of even self-centered dullards as they invade the homes of family building families through the TVs and the cell phones and in that such poison spreads through all the limbs of the body turning the veins black as they go, such scenes won't even take place in the streets outside the bedroom windows of their children.

I have written this little fable about the Ukraine of the past and America’s march to an other Ukraine in its own future as a way to remind you that you have to make a decision to turn your feet towards the high road and recognize the seductions of inflamed ego and false promises and jealousy and the memories of injuries for what they are, tributaries leading into the main River flowing out of history and spilling over the Cascades at the ends of the earth into the abyss called HELL.

You make a choice worth making when you make a choice to keep your own Peace within and walk with whatever force of will power it takes in the footsteps of compassion and kindness. If the battle is lost with you, the battle will be lost. The world is but a reflection of the Ukraine on the vast curve of the sky.. 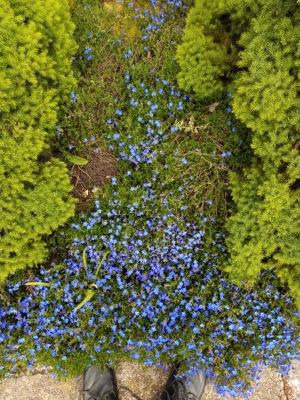